Hello! This year is already half over and my birthday is approaching at the end of July. Last year I made a wishlist on here of a few things I wouldn’t mind getting for my birthday. It worked pretty well so I’ve decided to make a new wishlist for this year:

“Heavy Hangs the Head” by Taryn Hipp.
She’s behind the ladyteeth zines that I’ve enjoyed reading recently. You can buy the book on amazon.com which has UK shipping. I’m not sure how else to get her book. At last resort, you can contact her. She’s @tarynhipp on Instagram and Twitter.

Ilford HP5 35mm black & white film
I love taking photos, and enjoy developing my own black & white photos in the darkroom. So this film would be an inexpensive and very practical gift!

Mushroom PVC Apron from Cath Kidston
It’s strange that I don’t own an apron considering how much I bake and cook. I’m not usually a fan of Cath Kidston, but I absolutely love her mushroom patterns. ♥

The Diary of Frida Kahlo.
What it says on the tin.

The Punk Singer on DVD
It’s just released here in the UK, and I’ve heard nothing but amazing things about this documentary. Plus, I just finished reading a book on the riot grrrl scene and now I like Kathleen Hanna even more. If nobody buys me this for my birthday I’m going to end up buying it for myself because I really want to see this.

These SuAtelier Stickers from Artbox are great! Especially the Stamp & Midnight Paris stickers.

I would like almost anything from the Artbox website. Everytime I visit their Covent Garden shop, I want to buy everything. Since I’ve started writing letters to friends again, the more stationary the better!

A Caffe Nero giftcard
It would definitely be used.

If none of those items appeal to you, I’d also like almost anything to do with the following: bats, narwhals, puffins, Iceland, Moomins (I already have a Moomin necklace and pocket mirror), and guerilla girls (look in the Tate Modern shop). I also like most gifts/items from Paperchase and JOY.

And of course, I like anything homemade. Whether it’s a mix CD, a drawing or something you baked, I’ll love it. Xoxoxox

Hello! I’ve just returned from a short vacation in Copenhagen, where I met up with my friend Kim, who flew there from Amsterdam. The weather wasn’t the best, but overall we had a nice time. I finally got to see Christiania, a freetown in Copenhagen started by squatters decades ago. We also took the canal tour and did a lot of shopping!

Here are some of the photos:

Favourite places in Copenhagen:
Empire Cinema – Apparently the best independent cinema in Copenhagen. We saw the new black & white American film, Frances Ha, which we both liked.
Laundromat Cafe – There’s also one in Reykjavik. It’s half-diner/half-laundromat. The food is great.
Christiania after the Green Light District – If you visit Christiania, don’t let all the drug dealing in the Green Light District put you off. Keep walking through and soon you’ll be next to a beautiful waterfront, pretty houses, a great veggie cafe and feel like you’re outside the city (see some of the above photos).
Pussy Galore’s Flying Circus – An apparently busy bar, but it was quiet when we were there! The sangria was wonderful.
Tiger – I know this shop is growing all over Europe, but I doubt any of the shops are 4 floors like the ones in Copenhagen’s city centre! Perfect if you want a nice gift, like Scandi design, and don’t want to spend a lot.

Sorry for not posting as of late. Life has been busy and work has been a bit stressful. However, the weekend before last I went to Scotland for a few days with my husband as he had to attend a conference there. While there, I met up with some friends and overall had a great time!

And this weekend I’ll be in Copenhagen with my friend Kim! Can’t wait!

Hope you are all having a Happy Halloween week/end! xoxox

Still ‘sketching’ for my final self-portrait for my Intermediate Painting class. We had a substitute instructor who was a really nice lady. I swear everything she saw was “really good”. So this painting is “really good” and also “like those Ancient Roman paintings with the big eyes”. So, it’s Ancient Roman….with a modern dye job. I also think this painting brings out my Norwegian features a lot, so it’s Modern Ancient Roman-Norwegian? You have to give me points on originality.

I’m the only person in the class that hasn’t started their final painting, so I should really start next week! Wish me luck. xoxox

My new job is at a peace building NGO, and I am really enjoying it so far. We have a reference library full of everything you’d want to know about peace. This library includes the book Peace Snapped by Rupert Hopkins that is full of photographs he took of peace movements in the UK from December 1982 to September 1986. There are so many photos I wanted to share, as Hopkins manages to capture the personalities in his subjects as well as get across their activism, but for now here are a few of my favourite snaps:

Have a good weekend! xoxo

Daniel has gotten into astrophotography recently, where he took this amazing photo of the Moon, right from our flat. Using this image, he made it into a cyanotype, and I absolutely love it:

Saturday night was the launch party of Space is Ace at the music venue Power Lunches, run by artists Melanie K, Marta Santuccio, Louise Beer and Lauren Franklin. The event itself was very unique – a installation of art, music and even edible planets(!), all representing space and the universe. Emma Jane Falconer provided the promo artwork and DJ’ed all night, while Sam Battle and his chiptune friend Shirobon provided some really catchy tunes on their synths, while dressed up in tinfoil and binbags! Unfortunately it was too dark for me to take photos of this performance, but it was my highlight of the night! And of course, before leaving I bought one of Emma’s posters, because they’re awesome. 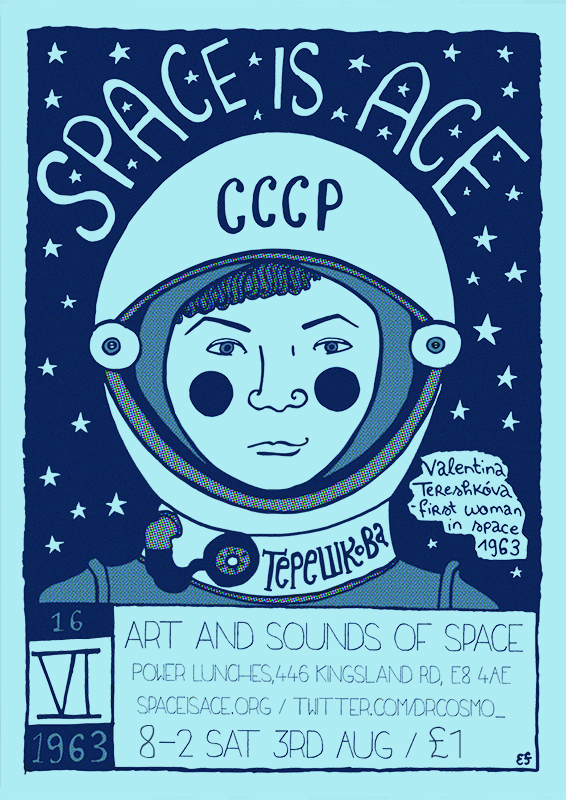 Did I mention everyone got a free zine?

Melanie with some of her work.

with some friends at the event

They are planning another Space is Ace event for sometime in September, so keep in the loop by liking their Facebook page! xoxo

Miss Van is arguably my favourite street artist. I discovered her work online years ago when I was still living in Minneapolis, and became such a fan that when I was in Barcelona last year I wandered around determined to find some of her work. She’s famous enough in Barcelona that you can buy Miss Van postcards in souvenir shops, but sadly, I never came across any of her works on the street. As a small compensation, I bought one of those fake street art canvases depicting one of her paintings from Spitialfields Market, but still had never seen her art in person.

So imagine my surprise when leaving the office yesterday when I came across a huge Miss Van mural right in front of me!! It really brightened my day.

I hope it stays there for a long time. ♥

For more art and exhibition info, visit her site. xoxox

I had my birthday party this past Sunday, and in addition to the party I created a home-made exhibition of my work! Everyone seemed to enjoy it, and that was the whole point. I had fun creating it and hope to do it again sometime in the future.